In December 1985, the UNESCO included the “Old Town of Segovia and its Aqueduct” on its World Heritage List. The beauty of the setting, the surroundings, and the city’s buildings, groves and streets are evident grounds for the inclusion of the city on a list that is based on precisely these values.

But the city is more than its mere physical presence. This is evident here and now. The human element that created the city goes unseen, yet it is the true essence of Segovia.

Segovia is what it is because Alfonso X studied the heavens. Because Quevedo was inspired by its setting and its people to write Historia de la vida del Buscón. And because in this city, the Catholic Monarch Isabella I was declared Queen of Castile, a momentous occasion in history. The first printed book in Spain was printed here.

Segovia was built by the mystical poets and saints John of the Cross and Teresa of Jesus, and by the brave warriors Juan Bravo, el Comunero, and Día Sanz and Fernán García, who recaptured Madrid from the Moors. Segovia was also shaped by the words of María Zambrano; by the strolls, social gatherings and classes of Antonio Machado at the Instituto; by Gómez de la Serna revealing “The Secret of the Aqueduct“; and by Louis Proust researching at the Royal Laboratory of Chemistry next to the Alcazar. 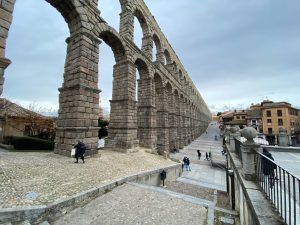 Segovia was home to a populous Jewish community, with such renowned names as Abraham Senneor, chief magistrate of the Jewish quarters of Castile. In the Moorish quarter, the alfaki Içe de Gebir wrote his seminal work Kitab Segovianoor Breviario Sunni, while the Prior of the nearby monastery of Santa Cruz, Tomás de Torquemada, promoted his ideas that included a cleansing of the religious atmosphere.

Segovia was also home to a successful textile industry and represented a prosperous international hub for the wool trade, which for centuries provided a source of welfare for Segovian citizens that is reflected in the architecture of the city, and especially in the Archives that so committedly preserve the written history of the city.

And Segovia continues to be built even today, although the economy is based on the cultural attractions and local cuisine it offers its visitors. The city has many interesting museums and galleries, as well as a wealth of renowned restaurants and taverns where visitors can enjoy the many specialties of Segovian cuisine.

Several times a year the streets and squares of the town are filled with artistic activity: Easter week hosts the Sacred Music Festival, with spiritual and sacred concerts offered in local churches.

Titirimundi is the international puppet theatre festival, bringing puppets and marionettes to outdoor venues to tell tales of magic and imagination.

Folksegovia is the most prestigious folk music festival in Spain. It is very moving to be able to experience African beat together with nostalgic and ethereal Scottish tunes within the stone walls of the Romanesque Church of San Juan de los Caballeros. 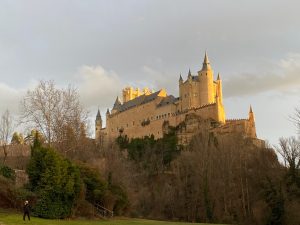 Palace courtyards, convent cloisters and notable outdoor venues set the scene for the MUSEG Segovia Music Festival, which includes the Chamber Music Week, the Youth Festival, and the Open Festival for theatre, music and dance.

The presence of two university campuses undoubtedly contributes to the growing offer of cultural and information activities in Segovia, set against the backdrop of the monuments that have made the city a World Heritage Site.